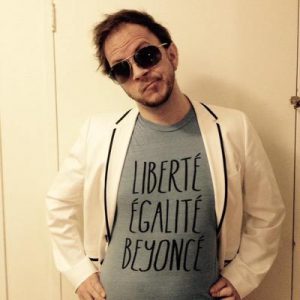 Here at the filmmaking fool, I love sharing my experiences diving into the filmmaking world. I thought it would also be great to share some other start-up stories of filmmakers, writers, cinematographers, festival programmers, actors, and anyone else involved in the film world with you all. I hope to include artists at all stages of their careers, from hobbyists to professionals, who can share their perspectives on taking the first steps toward making films.

I am excited to feature Sean K. Robb today.

Sean K. Robb is a Canadian filmmaker, writer and photographer. His favorite movies are Casablanca, Blue Velvet and The Texas Chainsaw Massacre, his favourite writer is Martin Amis and his favourite photographer is Richard Kern.

As a kid, I was a little obsessed with the old Our Gang/Little Rascals shorts, which seemed to always be on TV. My favourite episodes were always the ones where Alfalfa, Spanky, Darla and the lot would decide to “put on a show” — and I remember distinctly, from a very young age, being inspired by those shorts to do the same.

I made the (brilliant) decision to partner with someone (Shannon Foerter) smarter, more organized and differently skilled to handle all of the logistics, money and everything else I knew I wouldn’t be able to handle. Together, we began holding weekly meetings — just the two of us — inviting new people to the fold whenever we could and enlisting every friend from the TV biz that we had. Soon, we had a full crew, at which point I handed over to Shannon $10K that I had managed to save from my music journalism, and we began casting! We begged for and borrowed everything we needed and only spent money when we absolutely had to.

Not sure what I would have done differently at the start, but I definitely would have been tougher on myself — and the film — in the editing room. Killing your babies is hard and my one criticism of SCARS is that I left a few standing.

A lot of cajoling. It’s hard, particularly when you’ve made something dark, distasteful and violent — which a lot of people, myself included, seem to think SCARS is.

Having only made the one, I’m still pretty fond of SCARS!

To quote a famous shoe company, just do it. The means of production are within our grasp. Recognize that there’s nothing stopping you beyond the impracticality of it all and use every tool at your disposal to make it happen. You will be glad you did.

Working on a couple of different scripts and doing my best to figure out how to pull it all off again! (Though with someone else footing the bill this time!)