As the filmmaking fool, I love sharing my experiences diving into the filmmaking world. I thought it would also be great to share some other start-up stories of filmmakers, writers, cinematographers, festival programmers, actors, and anyone else involved in the film world with you all. I hope to include artists at all stages of their careers, from hobbyists to professionals, who can share their perspectives on taking the first steps toward making films.

I am delighted to start this series off with one of my favorite scrappy film pranksters, Jim McDonough of Friday Night Films. Jim creates short, surreal, fever-dream adventures through space and time, delighting and perplexing web, festival, and television audiences worldwide.

Two guys with too much time, too little talent, and an abundance of fake mustaches.

Making movies always felt like eating popcorn on the moon. It sounded so amazing, but it was so beyond anything I experienced or thought was possible. I didn’t really know anyone doing it growing up. I was really obsessed with films, and it was almost like films brought me some kind of melancholy, where it was something I was so in love with, but I figured it was something that was always something I would wish I had tried. When you get into your thirties there is this feeling of, “this is who I am now.” 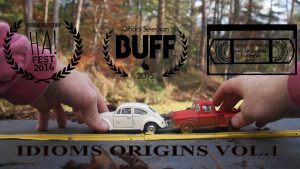 And making my own films, I just didn’t know where to start. The idea seemed audacious. As a kid, I would be constantly writing short comic stories, and I would torture my family members with my puppet shows. But I think societal pressures to be involved with sports made me think my odd hobbies of writing stories and putting on puppet shows was just something that would make me seem weird. So from age 12 until 34, I wasn’t creative really in any active way.

When video came to the little cell phones around 2007, my buddies and I in Dorchester started goofing with those. And then, I found that you could shoot 640×480 on the Canon ELPHs in video mode on a video card that had a little better resolution. The quality looked terrible, but we were really making something. My friend Rob, who is much more private about this stuff, was a film major. One day, he just edited a bunch of our videos without any real narrative and added some music and sound effects here and there. When I saw this, I kind of went a little bananas. and my mind started racing as to what we could do.

One night after a few too many drinks, I was shaking the digital ELPH camera. This was late 2007, original model I think, but when I watched the playback, it looked like a earthquake. So I filmed a bunch of stuff with a loose narrative, Rob edited it and it, and it became this 7 minute superhero parody.

It is embarrassing to watch, but considering it is a first attempt, I am proud that I was ambitious to make it despite it’s shortcomings. Rob ended up making it into a 90 second trailer. It is really crap in most ways, but I think it is helpful for people to see, it and say to themself, “What? You can just make that and that is it? You don’t need any other actors or talent?” YES YOU CAN!

I don’t think I would have done much differently. Well, I certainly wish I started earlier than 34. But as far as since we started making stuff, I am a big believer that in some ways you need to make the mistakes and learn the hard way for the learning to sink in. 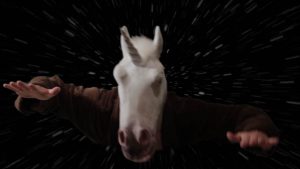 I used to be really into building an audience by posting a lot on Craigslist and Facebook and Twitter, but I think I just got over that a bit.

I think after the fun of having a few of my shorts (Manicorn and IDIOMS ORIGINS VOLUME 1) play with actual live audiances at some local festivals, that has replaced my old need for tricking people into watching via craigslist.

Back when we were first doing this I kind of enjoyed going after the trolls. So, for example, we made a short called Size Matters about getting upsold at the movie theaters. I found the Rants and Raves section of Craigslist to be some of the meanest, nastiest people, and many tended to be really hateful. So, I would enjoy trolling them. I would post, “Does Size Really Matter?” and link to our short.

On the positive end, these tactics did drive viewers to our vids, but people would get angry that they were mislead, and they would give some really nasty comments. Sell Your Gold For Cash was one of our most “disliked shorts” based on thumbs down votings. It had 51 dislikes and I wanted more! 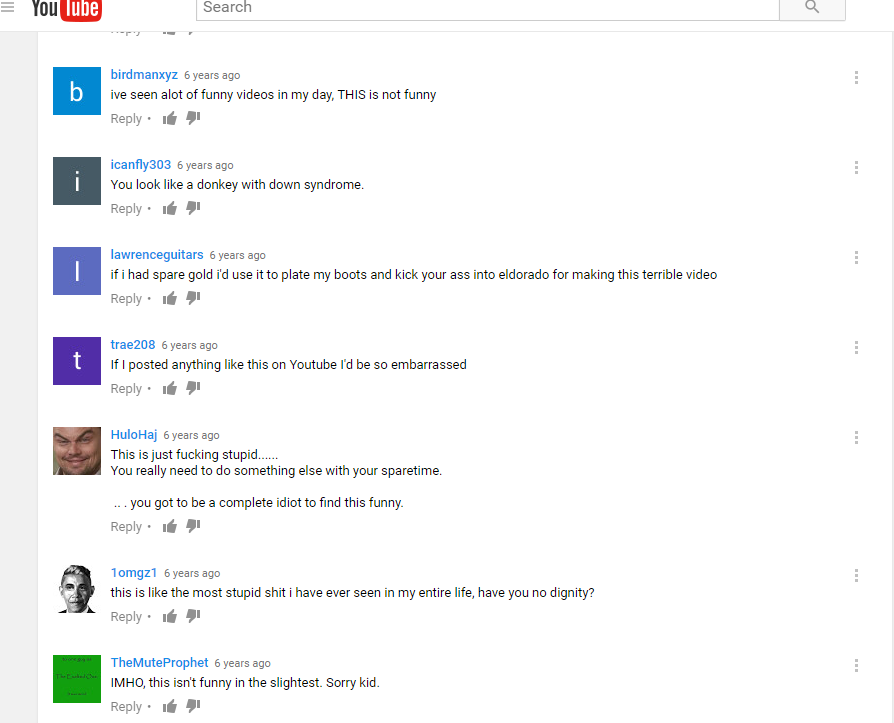 I think this gave me a thick skin about our stuff, but it also it made me realize how much I like being a bit of a rascal.

So now, when I’m writing something, I rarely think about how it will get seen until it is done. I think that if I were to write something specifically for the audience, for me, that would be creative poison. But having said that, I do think you have to mindful of the audience and their interpretations, frame by frame. I think you have to make it for yourself with a watchful eye to adapt to your audience or subvert your audience.

I want to keep making them better, but I think to define success in any kind of monetary terms would be silly for me. I just can’t imagine that being what this is about for me. So maybe foolishly, I don’t have any goals for any kind of traditional levels of success, like making any actual money.

I’m probably victim of recency bias, but I’m partial to our most recent, The Ultimate Tear.

I’m sure I am into it because I haven’t gotten sick of it yet, as we just put it up on our YouTube page. We wrote and shot it all in a few hours on a Saturday night.  And because Bobby edited that one in about 5-6 days, I wasn’t involved with the post production. For a lot of the recent ones where I am editing and shooting 30 minutes a night for 6 months, I tend to get sick of that stuff. I find that when I am editing a short, and I spend so many hours with it, it doesn’t give me the same amount of excitement as watching the ones Bobby edited, and I didn’t see after filming until they were complete.

As for favorite, actually it’s still Manicorn. I never get sick of that one.

Just make stuff! I know that sounds so vague, and it’s barely a tip, but I really think you just need to start on your phone or any camera you can get your hands on. One step at a time. Put it in video mode and record some stuff. Copy that to a computer, put some music on in the background, and watch it. If you are having fun still, look at cheap editing software, and play around with that. You can learn almost anything by searching for tutorials on YouTube.

The only advice I can give is what I did, which is so specific to my journey and privilege, but I do think there is something to be said for trying to learn it all at first and then specialize, or not! I need to write stuff because I can’t fathom the thought of waiting for others to make a film. I think you just have to try and jump in.

What are you working on now?
Like most of us doing this, I don’t make any living or any money. I have a career that I am also passionate about. So with 2 little kids, I have to be really disciplined with my time. I spend 30-60 minutes a night on my films. I happen now to be about 40% into the second of my IDIOMS ORIGINS series. I tackle a different idiom origin in each one. This one involves aliens and David Bowie. I hope to have it done in the next few months or so, but for this one, I am pulling all the post-production duties, so I tend to work slowly these days.