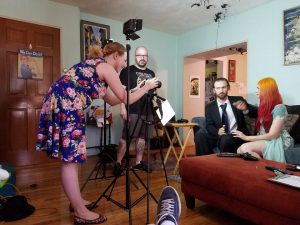 As the filmmaking fool, I love sharing my experiences diving into the filmmaking world. I thought it would also be great to share some other start-up stories of filmmakers, writers, cinematographers, festival programmers, actors, and anyone else involved in the film world with you all. I hope to include artists at all stages of their careers, from hobbyists to professionals, who can share their perspectives on taking the first steps toward making films.

I am excited to feature Porcelain Dalya today. We have had the wonderful pleasure of working with Dalya on music videos, shorts, features, live shows, and just about everything else imaginable! Over the past few years, Dalya has made a transition from focusing on acting to also add writing and directing! She has made several clever, innovative, and fun shorts that have seen festival success and praise. She is early in her filmmaking career, but we here at Filmmaking Fool can tell it’s going great places! You’ll definitely want to keep an eye out for her future work! 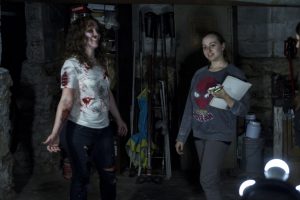 I started acting in films, and fell in love with it. I love being able to experiment with different things, and not worry about making mistakes, because you can always get another take!

I have so many stories I want to get out of me. I decided I wanted to start telling them. I also want to give a place for women and POC actors to have roles that are beyond their normal stereotype tropes.

I was very lucky that I had Michael and Sophia rooting for me to make something. They helped with all the technical stuff, shooting, sound, editing. All I had to do was clear my basement and direct.

The second film I made I feel like was my first real attempt at making something. In the sense that I worked on the script for a while, I held auditions, I hired my cast/crew, I even had an amazing producer help me figure out how to do things. (Shout-out to Andrea Wolanin!)

I would have actually written a script rather than just some scribblings on a piece of paper. Ha!

I think I wish I had thought about other films I wanted to model mine after so that it would be easier to communicate what I was going for.

I was lucky enough to get into the Boston Underground Film Festival. And then I threw it up for people to watch at their leisure. 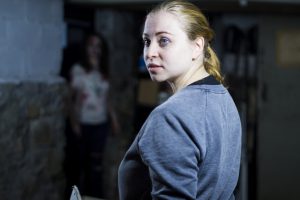 I feel like I was successful because I made something, from start to finish. I have acted in a lot of stuff that never gets to see the light of day. I also feel like it was a success because I learned so much from it. Just making something and being in that role you start to be able to figure out exactly what you want to do.

At the same time, I’m not super happy with it. It definitely looks like my first try at making a movie. There’s a great video by Ira Glass called The Gap I recommend it to any artist in whatever medium. He’s basically saying that it’s normal to hate your bad things you make when you’re first starting. But you have to push through the bad to get to the good. I’m still pushing through the bad. I feel like mayyyybe I’m starting to get to mediocre. Maybe.

I think my latest one, TEARS, is my favorite. It’s such a fun little short that had been rattling in my head for a little while. We had a small crew, and we made it a reality. It also won 1st for the bumper contest for Fantasia. So at the very least, someone else agreed that they liked it. 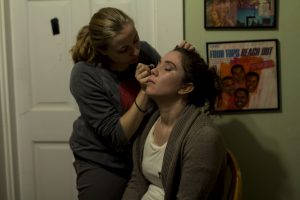 Just do it! Just make the thing! Don’t worry about the money. Don’t worry if it’s any good. Just make it. Oh, and google spreadsheets are a god-send.

I’m working on a stop motion short film, it will probably be 10 seconds in total. I’m still working on designing it and what materials I will use.

I’m also working on a few scripts, hoping to get another short done by the end of next year. We’ll see!

Keep up with Dalya at: http://porcelaindalya.com/